The tallest buildings in western Broward County are just a few months from being ready for unit owners to start moving in.  The two 26-story Tao condo towers will have 396 residences (with 1, 2 and 3 bedrooms) and, per the builder’s representatives, are currently about 90% sold out.  The expected date of completion is April 2008 with closings starting in May.  Prices start in the high-$400’s for the 1-bedroom condos.  Maintenance fees are approximately 38 cents per square foot per month.

The views in the upper floors of these highrise buildings will undoubtedly be amazing.  I doubt I’m the only one who’s seen these towers from a considerable distance!  I know I’ve spotted them from as far north as the Sawgrass Expressway between Atlantic Blvd. and Sample Road.

“Christmas on Las Olas” is a Joyful Holiday Event!

The holiday season is in full bloom!  If you missed this year’s “Christmas on Las Olas” holiday event in Fort Lauderdale, be sure to put it on your calendar for next year.  The event kicked off just as the sun went down.  The boulevard trees are now wrapped in tiny white lights and there are interesting holiday light displays not only on the Las Olas Boulevard medians but also atop many of the local businesses.  “Snow Mountain” was a big hit with kids and, of course, Santa was available for pictures!  Everywhere you looked there was something going on.  The festivities included Christmas carolers, dancers, performers dressed in Dickens-style costumes, as well as music ensembles, bell ringers, karaoke and live jazz.  There was even a holiday movie being shown on a big screen with an open seating area.  All this and admission was free!

The Las Olas Boulevard shops showed their holiday spirit with displays of all kinds, including live mannequins!  Even the Riverside Hotel and restaurants along the route gleamed with lots of holiday lights, wreaths and other holiday decorations.  The historic Stranahan House was also decorated for the season and open to the public at a discounted rate.  See a 60-second show of some of the highlights of the 2007 Chrismas on Las Olas event!  The Christmas ornaments pictured here are from one of my favorite Las Olas Blvd. shops – the Seldom Seen Gallery.

In comparing the South Florida real estate market conditions from September to October 2007, there were only relatively minor changes in each of the three South Florida counties with regards to the number of resale homes sold.  The same can be said for the number of resale condos sold with one exception — Miami-Dade County saw a sizeable increase in the number of sales (up 23% from the previous month).  This is especially good news since there has been so much talk about the glut of condos for sale there.

Meanwhile, the median sales price of resale single family homes increased slightly in the Greater Fort Lauderdale area but decreased in both Palm Beach County and Miami.  Sadly, when compared to last month, the median sales price of resale condos dropped in Broward County by about 8.75%, in Palm Beach County by approximately 12% and in Miami-Dade by about 3%.  If, instead, we focus on the changes from the same time last year till now, it seems Miami is doing better than many in the media would have you believe.

While the numbers in the chart below will show you comparisons from one year to the next (during the same month), you’ll find that I typically comment on the month-to-month changes, so please keep that in mind as you review the information contained in the chart. 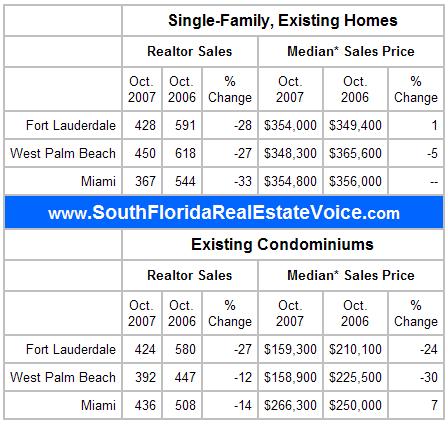 *Median is the price at which half of the homes sold for more and half sold for less.

The single-family home community of Plum Bay features a lakeside pool with spacious sun deck, cabana baths, covered patio, two tennis courts (one of which doubles as a basketball court), a fishing pier and a boat launch ramp next to the fishing pier/dock.  Homes in this South Florida neighborhood were built between 1995 and 1999.  Plum Bay offers one- and two-story homes, some with lake or golf course views.  Certain floorplans include a loft area, an ideal spot for a small home office, media center or play area.  Prices currently range from the high-$200’s to the high-$300’s and the community maintains a low monthly HOA maintenance fee.

Residents of Plum Bay can enjoy nearby parks including Sunset Point Park (11000 W. McNab Rd.) as well as the Caporella Aquatic Center (across from Challenger Elementary School and Millenium Middle School on NW 94th Avenue).  The main entrance to Plum Bay is located a block north of the N.E. corner of Commercial Blvd. and Nob Hill Road providing for easy access to the Sawgrass Expressway.

Call Leanne Paynter at 954-846-1600 to find out how you can qualify for a $1,000 rebate if you want to purchase a home in Plum Bay.  You can search the MLS for listings of homes for sale in Plum Bay here.

Relocation to South Florida can be stressful and one of the issues often taken into consideration when deciding which city to relocate to has to do with crime statistics.  The 14th edition of the City Crime Rankings from CQ Press — published this week — can offer anyone relocating some useful information.

Enjoy water views of the navigable canal with access to beautiful Lake Osborne!

This updated quad-style townhome is located in the gated community of Waterside Estates in Lake Worth.  It offers 2 bedrooms and 2.5 bathrooms and has been freshly painted.  The townhouse features a fenced courtyard entry, has new shingles on the Mansard-style roof, new hurricane shutters and all new appliances.   In your free time you can go swimming or simply lounge by the sparkling lakeside pool in the center of the community.

This spacious townhome comes with two assigned parking spaces!  Have a large dog?  No problem!  They are allowed in this community.  The $575 maintenance fee is paid quarterly which comes out to a reasonably low $192 per month (when compared to similar properties).  This townhouse is being offered at $154,900.

:: View a Virtual Tour of this Lake Worth Townhouse. ::

This charming townhouse community is only about a 5-minute drive to I-95 making for an easy commute to many points north & south and only about a 10-minute drive to the beach.  It’s also very near John Prince Memorial Park which includes a boundless playground, picnic pavilions & shelters, over 35,000 feet of lake frontage, boat launching ramps, fishing piers, tennis and basketball courts, volleyball areas, a bicycle path and even a nature trail.

If you’ve ever driven around the downtown Fort Lauderdale area, chances are you’ve driven through the Henry E. Kinney Tunnel, more popularly known as the New River Tunnel.  Actually, it goes under not only the New River but also Las Olas Boulevard on the north side and S. New River Dr./N. Rio Vista Blvd. on the south side.  The photo was taken at the south entrance looking north.  The buildings you see are the SunTrust building on the left and the Riverside Hotel on the right.  It’s a 4-lane tunnel and pedestrians can use it as well since there is a sidewalk on the east side.

The New River Tunnel, which took the place of an inefficient drawbridge that at times caused massive traffic jams, took just over two years to be completed and opened in December 1960.  In 1986 the tunnel was renamed in honor of Henry E. Kinney who was one of the strongest advocates for the construction of the tunnel (instead of a new drawbridge) during his time as editor of the Fort Lauderdale/Broward edition of the Miami Herald.

TRIVIA:  Only two other underwater tunnels exist in Florida and they are in Walt Disney World in Orlando.

Many residents of this city work in Miami-Dade County due to its proximity and live in Pembroke Pines due to it’s relative affordability and the lifestyle it offers.  If you’re in the market for an affordable single-family home in this area, you should have no problem finding one… even if you’re looking for one with a pool and/or lake views.

The real estate market conditions in South Florida of recent times has allowed for more affordable housing for anyone considering buying a home in Pembroke Pines and elsewhere.  The inventory of homes for sale in South Florida is still high, allowing for more choices for home buyers.  Additionally, mortgage rates are still at historically low levels… all something to think about if you’re still “sitting on the fence”.

Below is a sampling of recent home sale prices* in Pembroke Pines, Florida (sold/closed sales over the past 2-3 months through the date of this post).

*As reported on the Southeast Florida MLS. <– View listings of South Florida homes for sale!

Just five days after the U.S. government unveiled a new website – Drought.gov – the South Florida Water Management District announced today that “seasonal rains did not sufficiently replenish regional water supplies to meet the coming dry season’s demands.”  With Lake Okeechobee registering at 10.38 feet above sea level yesterday, it is 1.15 feet below its previous historic low for this date (26 years ago in 1981).  This time last year, the lake was 2.29 feet higher.  The SFWMD news release continues:

“Because Lake Okeechobee serves as a primary backup water supply to more than five million South Floridians in the District’s Lower East Coast, residents there must continue to observe current modified Phase II restrictions, even though local rainfall has seemed plentiful.  Residents are also encouraged to conserve water within the home to help stretch regional supplies.”  With that in mind, here are some helpful resources:

– You can get Lake Okeechobee water level updates here.

– Are you water-wise?  Take the home water audit and find out!

– Meanwhile, this list started out with 100 Water Saving Tips but somehow ended up with 111.  🙂

The following are upcoming Broward County events scheduled for this November.  There’s a terrific variety of events to pick from this month… you’re bound to find one you’ll want to go to!